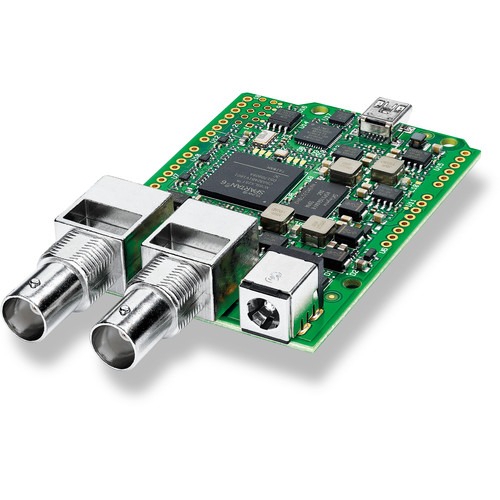 Create a custom camera control solution with the 3G-SDI Arduino Shield from Blackmagic Design. Working in conjunction with a separately available Arduino controller, the Shield embeds an SDI control signal in the Program return feed that will operate compatible cameras, such as the Blackmagic Studio Camera or URSA Mini with the Studio Camera firmware update. These are the same controls output via an ATEM series switcher.

This open communication protocol takes advantage of blanking space in the SDI data stream to add talkback, tally, and other camera control information directly to the camera via the program return feed. Because of its open nature, you can create custom solutions that are compatible with switchers, cameras, and other supporting hardware

The following controls are supported via SDI (Note: Availability may depend on camera and lens configuration):

An Arduino is a controller – basically a simple computer – that can be embedded in other devices to create custom solutions. In this case, installing on the Shield. Once you have the Arduino, you can download the IDE (developer software) from the Arduino website, then load the Shield’s “sample code”. This will give you a feel for how the Arduino interoperates with the camera and help you get started programming

Arduino programs are called Sketches and are designed to be easy to write. You can install “sample code” via the Arduino IDE (available from Arduino’s website) to get a feel for how the system works. The commands for camera control are documented in the ATEM and Studio Camera manuals (available from the Support section of the Blackmagic Design website)

The Arduino Shield only uses the I2C bus, which means it is also compatible with other micro controllers, including a Raspberry Pi